Gold and Platinum mining stocks were on fire yesterday. Implats was considered the laggard because its stock was only up 4.5%. Goldfields and Sibanye Stillwater were up 10%, and Northam was up 8%. All those gains meant that even with Naspers being in the red, the JSE All-share closed in the green. Internationally, markets are still swayed by news coming out of Asia around the coronavirus. As it stands, the number of new infections is at a similar rate to the number of recoveries. If recoveries continue to climb, and the infection rate continues to slow, that would be a good thing.

Global food-services business Bidcorp is a company that we hold for most clients with JSE portfolios. For those with short memories, this group was spun off from the old Bidvest in May 2016. It has a market capitalisation of R106 billion. The share price has done fairly well since the separation, rising to a recent high of about R340 per share.

Bidcorp’s head-office is in a new building at 90 Rivonia in Sandton, but in reality the group is run from wherever CEO Bernard Berson and CFO David Cleasby happen to be at the time – which is probably in a plane, or the meeting room above a warehouse, or in an airport hotel. They have operations in Australasia, Europe (plus the UK), the Middle East, South America, the Far East and Africa.

The core business is sourcing, preparing, refrigerating and delivering high-value food products. They focus on just-in-time, flexible service to their end customers using the best available ordering and billing systems. They have a strong preference for devolving management accountability and retaining entrepreneurs at an operational level. They have grown through many acquisitions over the years, often of family-run businesses.

The company put out interim results yesterday which were basically flat compared to the prior period. The key headline earnings per share number was up 4.0%. The board of directors declared an interim cash dividend of R3.30 cents per share, up 6.5% from the same period last year. The chair of the board is ex-Investec CEO Stephen Koseff, who is an absolute legend, and one of my favourite South African businesspeople. That’s him in the picture below.

Here is the management commentary from the results presentation, giving you an idea of the breadth of their operations:

Operating conditions were challenging in a number of geographies. Social unrest in Hong Kong and Chile impacted out-of-home demand, the bush fires in Australia dampened consumer sentiment while the lead-up to the UK general election and Brexit-fatigue dampened British consumer spending. In addition, trading performance was impacted by management underperformance in Bidfresh UK, Spain and Germany.

Europe continued to perform well, particularly Netherlands, Czech and Slovakia, Italy and Poland. Australia’s revenue growth remained subdued while the team continued to rationalise exposure to lower-margin customers. New Zealand achieved both top-line and margin growth, offsetting cost pressures. Bidfood in the United Kingdom continued its growth trajectory. However, this was somewhat negated by the poor performance of Bidfresh. In Emerging Markets, South Africa maintained some growth despite tough economic conditions. The Middle East performed well. Greater China’s performance declined as the recovery in mainland China was insufficient to offset the impact of social unrest on our Hong Kong activities.

We continue to hold, and where appropriate, buy Bidcorp in JSE portfolios. People love to eat, and premium restaurants and dark kitchens continue to proliferate, so there will never be a shortage of customers for Bidcorp. The challenge is to do the job better than their competitors. The group electronic ordering system BidOne now handles 30% of total group sales. At a price-to-earnings ratio of 21, the stock is not too expensive at current levels. It is also worth noting that if the Rand devalues due to poor economic management in this country, and a sovereign credit rating downgrade, Rand-hedge shares like Bidcorp will hold their value.

This one is close to my heart because I am both a happy client and I know a few of the people involved. Santam Invests in JaSure, a Gauteng Based Insuretech Business.

The JaSure concept is really cool. If you have valuable items that spend a lot of time safely at home, why would you want to insure them 365 days a year? JaSure allows you to insure your items when you take them out the house. For example, I have a nice pair of binoculars. When I take them away, I hop onto the app, swipe right to insure the binos and they are covered for the duration of the trip. When I get home, I go back onto the app and take the insurance off. It is really cheap and very user friendly.

This can be applied to bikes, golf clubs, cameras, skiing equipment. The list is endless.

It is a classic example of an old industry being disrupted by our daily access to smartphone tech. It saves you money and gives you peace of mind when using expensive equipment. If that sounds like something for you, sign up here.

The industry most ripe for disruption is probably the healthcare sector, where huge potential sits with AI becoming part of the process. For supercomputers to do their thing though, information needs to be organised in a way algorithms can crunch the data. So companies have two tasks, one is to get as much data as possible and the second is to then have people ‘clean’ and arrange the data so that it can be analysed.

Google is one company in the race to revolutionise healthcare. They already bought Fitbit last year, part of the reason is to get their hands on healthcare data. Personally, I don’t have an issue with companies accessing my data and running analytics on it. If these supercomputers can use my data to make the world a healthier place, that sounds like a good thing.

You can read more here – Google Health is growing – despite privacy concerns and a federal inquiry.

Apple released a statement saying that the Corona Virus is going to hurt their China production volumes. The statement was short on detail, but fear not because our friends at Statista always have our backs and we thank them for that.

Other companies that did mention the Coronavirus being an issue in their 2020 numbers include apparel champion Nike, coffee giant Starbucks, the retailer Walmart, luxury goods conglomerate LVMH, and most recently Puma and Adidas.

The infographic below shows just how significant the Chinese consumer is to Apple, notwithstanding slowing total revenues. Yes, Chinese demand is at a five-year low after peaking at 25% of total revenues in 2015. Today it still contributes just under a fifth of all of Apple’s revenues. The release of the iPhone 11 was expected to help the Greater China sales bounce back, but mother nature has a wry sense of humour. 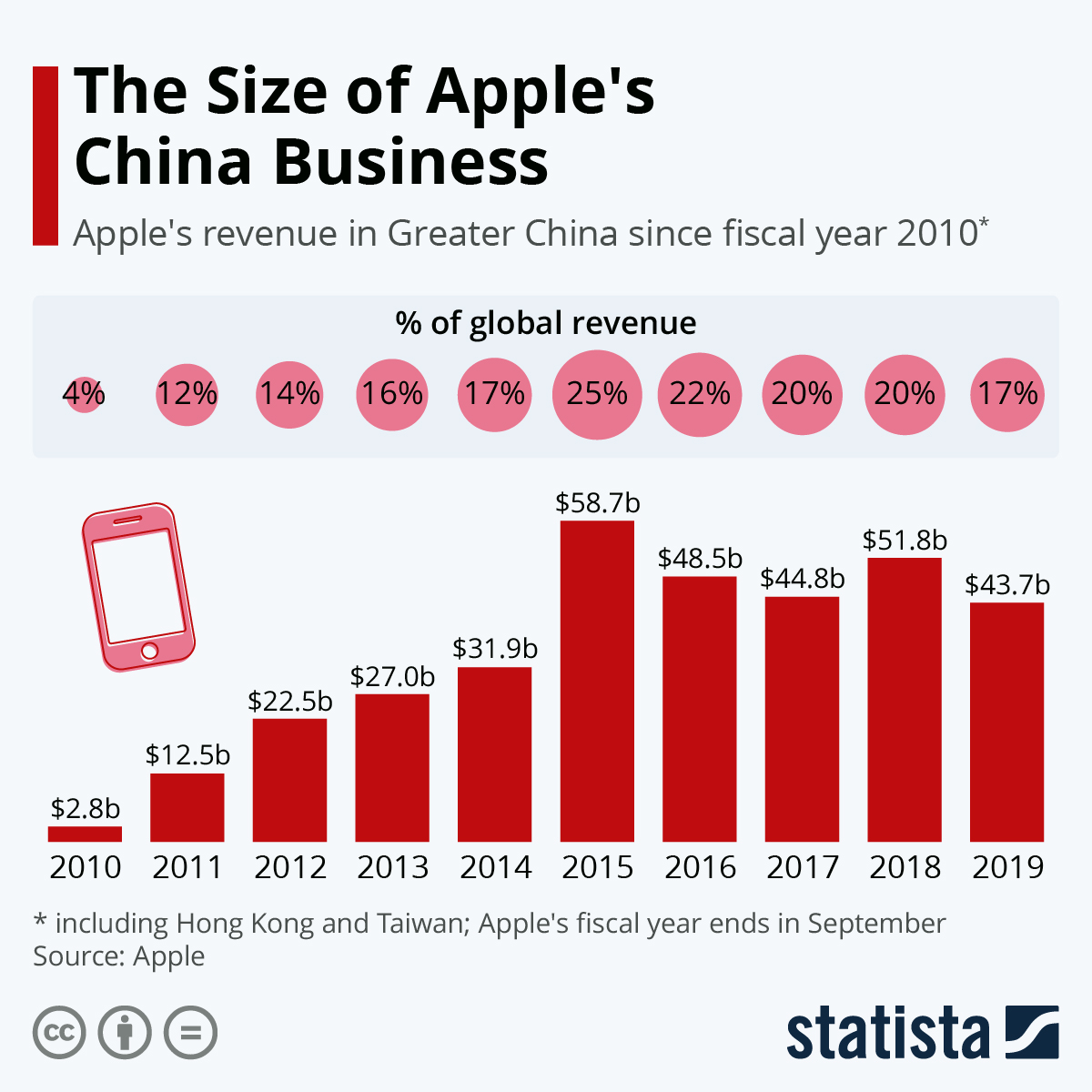 To get around sanctions North Korea has turned to crypto currency. Apart from mining crypto, it is estimated that the nation has hacked/ stolen $2 billion worth of Bitcoin – North Korea appears to have expanded its crypto-mining operation.

Yesterday, local CPI came in at 4.5%, slightly higher than in January but still on the low side of things. Later today there is a UK retail sales number. The Rand is weaker this morning, trading at $/R 15.05